At Sutton Golf Club through the years, I always introduced Bill to my overseas friends by his two infamous nicknames, “Reasonable Bill’ and ‘Rent-a Row Thompson’.

He was known to be well read and opinionated on certain issues, steadfast in holding his ground. Often the topics centred around basic right or wrong, fair or unfair, not unlike the foundations of the game of golf which he loved all his life. He valued integrity, honesty and good sportsmanship in people and always displayed such through his own actions. He had a beautiful warm handshake, always looking you squarely in the eye. Only his eyes would let you know the depth of his affection for you.

He was both handsome and dapper, which coupled with his irreverent wit made him irresistible good company. He was a great orator and loved holding court by the clubhouse window in Sutton. He had his own unique style when making speeches, cocking his head when laughing at himself out loud, with a confident, nonchalant gesture of his dominant left hand signalling the target of his often-harsh ridicule. 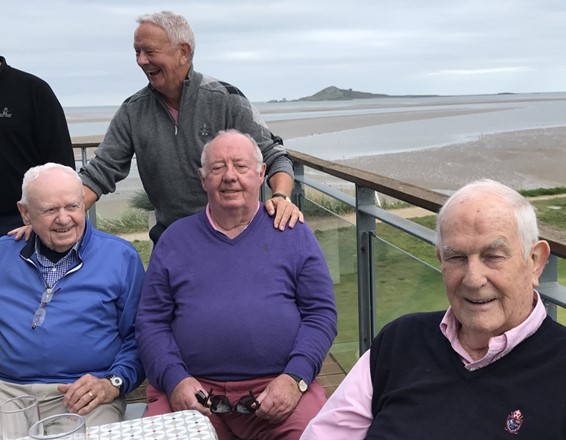 My last sitting with Bill holding court on the Balcony in Sutton with Ron Kirby & ‘Wilbur’ Brian Wallace.

He loved young people and the pureness of their energy. He was there for me in my early days at the Championships and especially at the Walker Cup in St. Andrews, where he led the chorus. Singing, Kevin Barry under the giant portrait of King George in the clubhouse, to let them know of the Irish contribution to the historic win. He returned twenty years later to witness, with great pride and shared joy, my father JB Carr ‘driving in’ as Ireland’s first Captain of the R&A.

Bill was my father’s and the Carr family’s best friend.  JB and he had such fun together, whether it be betting on the golf majors or the horses. They travelled together often over the years, especially to Portugal where Bill became fascinated with the olden day tales from Henry Cotton and his wife Toots. They talked daily in Pop’s later years and Bill was always there for him, right to the very end.

Bill, with Joe Duffy, were my first sponsors when I turned pro in 1971 and provided me with a two-door Datsun 120Y which carried Des Smyth, Warren Humphries and myself many thousands of miles over five years, to countless European Tour events. He always tried to help people.

I will never forget a day of great insight when I was visiting Bill at Joe Duffy Motors after many years at IMG learning about selling and marketing. I stood quietly observing Bill with a customer who didn’t look so affluent. Despite a second. obviously more promising customer waiting, Bill stayed with until his first client had everything he needed and closed the meeting. He had time for people and would never cut them off. I called him many times from overseas and would try to outlast him on the call – not once did he signal the end of the call! He was a truly a great, natural, trusted salesman, he and Joe Duffy single-handedly built the BMW brand in Ireland.

Most of all, Bill Thomson was deeply loved by Ann, by countless people like myself, by the Carr families and by his many friends. We will consider themselves incredibly lucky to have met such a true gentleman of his time, and be able to call him a friend.

Remember him with a smile – as he would have wanted us to.