A September Golf Sojourn to Scotland with Friends & your Club Professional 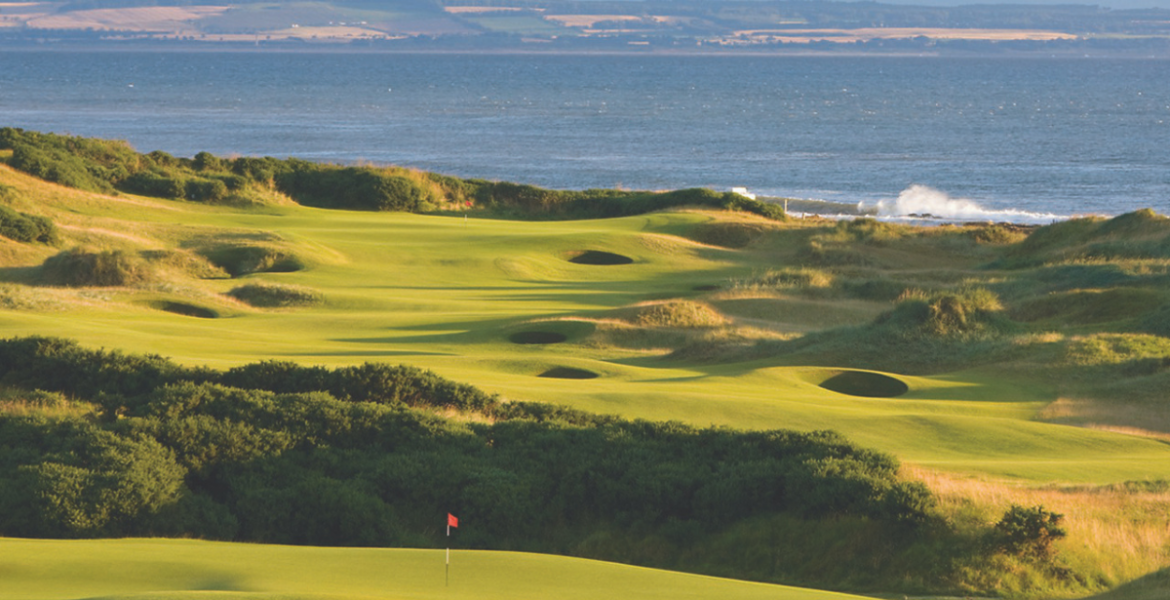 September is ideal for a golf trip to Scotland. We’ve put together a dream itinerary (based on a party of eight – 7 amateurs and 1 professional) for those seeking a “once in a lifetime” experience on several of the finest links courses in not only Scotland, but the world.

Depart from your home airport and prepare for an unforgettable trip.

Arrive at the Edinburgh Airport after a relaxing overnight flight. You’ll be greeted by a Carr Golf representative to whisk you away to the five-star Fairmont St Andrews. Boasting 520 acres of dramatic clifftop views, the opulent resort features 211 spacious guestrooms, two golf courses, multiple restaurants to suit any palette and a world-class spa.

Play the incredible Kingsbarns Golf Links. Occupying nearly two miles of stunning North Sea coastline, golf was first enjoyed over the rollicking dunes of Kingsbarns in 1793. The current layout was developed in 2000 – the first new course in the area in nearly 70 years – and was met with glowing reviews. It has co-hosted the European Tour’s Alfred Dunhill Links Championship with St. Andrews and Carnoustie since 2001. Last August the prestigious club hosted its first major, the Ricoh Women’s British Open.

The group will divide into two foursomes for this 36-hole day. One group will play Carnoustie Golf Links in the morning and Panmure Golf Club in the afternoon. The other contingent will do the opposite. These two championship courses are located just two miles from one another. An Open venue since 1931, Carnoustie will host this year’s staging of the historic event. In 2007, Ireland’s Padraig Harrington captured his first of back-to-back Open titles on this challenging test of golf. The historic 18 is generally regarded as one of the toughest and fairest venues on the Open rota.

Established in 1845, Panmure Golf Club is known for hosting the great Ben Hogan, known to Scots as “The Wee Iceman.” He practiced there away from the media ahead of his only Open Championship victory at Carnoustie in 1953. While the course measures just 6,511 yards from the back tees, thick rough flanks every fairway making accuracy off the tee essential.

After a satisfying day of golf, the group will reunite at the Marine Hotel & Spa, North Berwick. Known for its splendid 19th century Victorian architecture, the luxurious hotel offers 83 unique bedrooms.

Play North Berwick Golf Club. Dating back to the 17th century, the historic West Links course boasts magnificent views of the Firth of Forth and islands of Bass Rock, Craigleith, Lamb and Fidra. The sea comes into play on six holes and the beach becomes a long, unforgiving, and sometimes wet, hazard. The course is best known for holes Nos. 13 – 15 named “Pit,” “Perfection” and “Redan.” The last of this iconic stretch of holes is perhaps the most copied in golf.

Experience the “greatest day in golf,” a 36-hole affair at Muirfield. One of the most sought-after tee times in the world, mighty Muirfield has hosted more than 40 national and international championships including 16 Open Championships. A Tom Morris design, it was renovated by Harry Colt in the 1920s. Its mesmerizing routing features two concentric rings with the back nine nestled inside the front nine’s outer ring, ensuring a wide variety of wind conditions.

After playing the famous course in the morning, enjoy lunch in the stately clubhouse. Built in 1891, the delightfully traditional clubhouse enforces a strict dress code requiring a jacket and tie to enter. It houses an eclectic selection of pictures, memorabilia and some of the finest first edition golf books in the world. Afterwards, head back out for a spirited afternoon round of alternate shot play, a traditional game long enjoyed by members of the club.

Play Gullane Golf Club. Host of the 2018 Scottish Open and Ladies Scottish Open, The No. 1 course features scores of wily pot bunkers, wispy grasses and smooth-running greens all providing a stimulating and joyous challenge. Each hole has a unique character creating an exhilarating and memorable golf experience. Gullane No. 1 should be on every golfer’s itinerary when visiting Scotland. It’s an absolute gem.

Depart Edinburgh Airport with your closest friends and club professional to return home with myriad stories from your Scottish golf adventure.