The Ryder Cup – The Moment the Game Changed by Roddy Carr 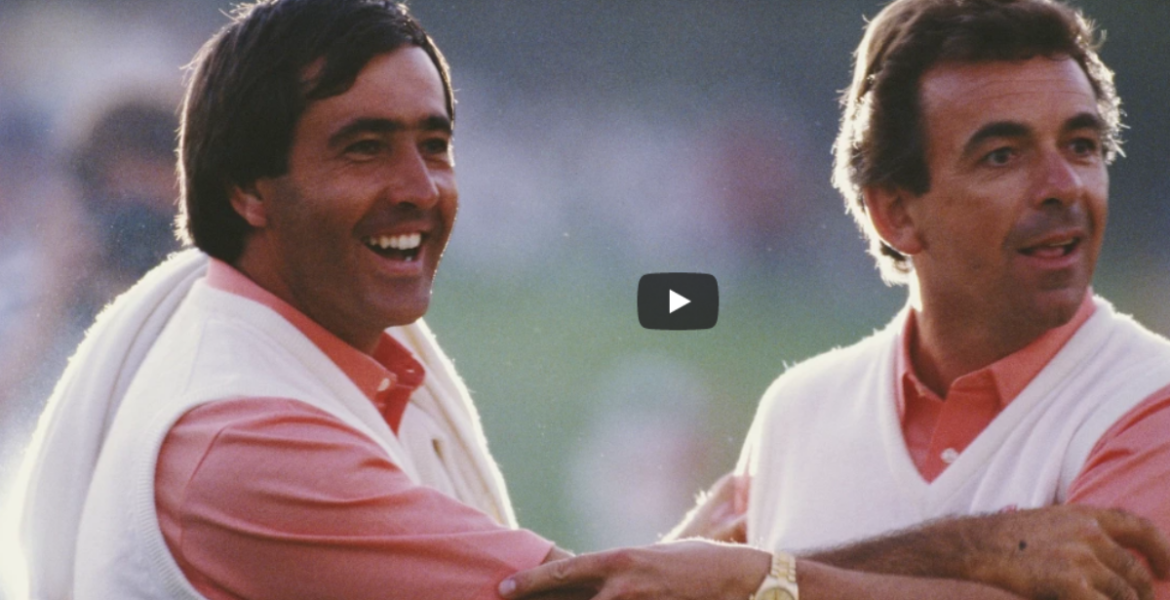 There is something so special about standing in your team attire and listening to your national anthem being played knowing you are representing your country or continent. Money does not enter your mind during those moments, no matter how much you have or have not. It’s sheer pride and passion to do the best for your country and win. The Ryder Cup is arguably the greatest ‘mano a mano’ team contest in the world and the emotion it evokes from the players that participate and the fans who watch is extraordinary. It is an event like no other in golf.

It starts when the bell rings at 7:30 AM on the Friday after all the ceremony and pageantry of the Opening Ceremony on Thursday afternoon. From that moment on, for three days the atmosphere is like a world title fight with the fans from home and away liberated to express themselves in full patriotic voice as loud and as long as they wish – with respect. Some “cool hand Luke” players find themselves uncharacteristically exploding with emotion. David Duval looked almost awkward with his fist-punching as he had never done it before!

I will never forget the ‘moment’ I witnessed the changing of the tide for this great event. For so many years it was a forgone conclusion, (a bit like the All Blacks matches in Rugby), that the revered trophy would remain on the other side of the pond as it had done for decades.

But all that changed in 1987. The Ryder Cup was at Ohio’s Muirfield Village, which was founded and designed by Jack Nicklaus, the greatest golfer that has ever lived and the U.S. Captain that year.

John Jacobs and Ken Schofield who started the European Tour were smart and inspired enough to call on Europe’s pioneering champion Tony Jacklin to take on the role of Captain. Jacklin, who has never ever received enough credit for his great achievements and contribution to the Ryder Cup, knew he needed a gladiator in the field to lead his warriors while he took care of the business of captaining. That gladiator was really a matador called Seve.

Jacklin was the first European pro in the modern era to beat the Americans on their home soil at the U.S. Open at Hazeltine in 1970.  He and Seve, who harboured a distinct dislike and grudge at being called ‘Steve’ and ignored when he first played in the USA, were to bond and form an unlikely but very formidable partnership.

Jacklin lifted the confidence of the older browbeaten members of his team and rookies by dressing them in cashmere and demanding they travelled on the BA Concorde and ‘buzz’ the Muirfield course on their arrival. This fired the opening shot across the American’s bow.

The ‘moment’ I refer to was at the Opening Ceremony. Jacklin had spent hours choreographing the line-up of his players and how he would introduce them in that stadium amphitheatre on the 18th hole at Muirfield Village with 30,000 American fans present.

Nicklaus introduced his players one by one and it was a formidable line-up that included the likes of Kite, Crenshaw, Wadkins, Stewart, Strange and Calcavecchia.

Jacklin spread his big-name players apart and slotted the rookies and lesser-known names in between the likes of Faldo, Lyle, Langer and Woosnam. He introduced them one by one by their full names.

He paused for a long time before introducing his last player, who looked like a Greek god in his brown cashmere blazer, white shirt and tie and said:  “and last but by no means least ……….(long pause) …… SEVE”.

I was looking at the American team at that moment and every single one of them including Nicklaus had their eyes transfixed on and looked almost hypnotized by Seve, whom they feared.

I turned to my friend Warren Humphries at the time and said, “He has them – he’s psyched them out.”   I immediately called my father and told him the story and told him to back Europe.

The heroic deeds of Eamonn Darcy on that final day against Ben Crenshaw is a story for another day, but the sight of Jose Maria Olazabal performing his flamenco-like dance of the 18th green was the celebration of a new dawn for the Ryder Cup.

For the matches that followed Muirfield, there were so many epic encounters. Most of the matches were decided midway through Sunday afternoon in the singles.

I have always imagined at around 3 to 4 p.m. on those memorable Sunday afternoons that there was a star in the sky circling around waiting to fall on the one deciding match, two players. It was therefore key for the captain to place the players he knew could handle it and who had the ‘cojones’ to withstand what all pros will tell you is the ultimate pressure cooker in golf.

It has crushed even the most seasoned veterans over the years. Strange, Langer, Calcavecchia and Floyd to mention but a few.

It is also the time when unlikely heroes are born. Many of those heroes have been Irish; Eamonn Darcy at Muirfield, Christy O’Connor Jr. and Paul McGinley at the Belfry and Graeme McDowell at Celtic Manor.  This is no coincidence as Irish players have won 10 majors in a 10-year stretch.

When my father took over the captaincy of the Irish Team in 1967, like Jacklin, he insisted on getting the best coach, John Jacobs, a fitness and conditioning expert, and having a winter training base in the sun at Sotogrande in Spain.

The Golfing Union of Ireland (GUI) have continued to develop and improve their developmental program over the years, which is based on match play from Club to Junior to Senior to Provincial to International levels. “Mano a mano” as Seve called it. “Hand-to-hand” combat where the strength of character of the individual is tested. The Irish “model” is now the study for delegations sent from the Far East trying to work out how our “little village” has produced so many major champions. There will be many more Irish players on Ryder Cup teams to come.

The Ryder Cup has changed in recent years. The change has been in the role of the captain. I had the dubious honour of managing Seve during his captaincy at Valderrama in 1997. It was utter chaos all week and only Seve could have pulled it off. I remember thinking during the week if we lose this, the players will turn on him (like they did on Tom Watson years later).

With Seve it was win or die, that was all he knew. One time only in Spain. He called me that Sunday night at 11 p.m. as I was sitting beside an exhausted Colin Montgomerie (who the “star” had fallen on that afternoon) to tell me to call Ken Schofield and tell him he would never be captain again! “Phew!” I sighed.

Langer was the first one I saw that approached the job with the relentless attention to detail over a two-year period that he is famous for. Nobody had seen anything like it before. The matches were effectively over by Saturday night under his calm and clinical leadership.

The Americans finally worked it out that the U.S. team members did not jell and that the honorary captain’s role was not working. Hal Sutton’s disastrous pairing of Tiger and Phil together was the last straw. Enter Paul Azinger. He set about his captaincy with the help of the military strategists, psychologists, mental coaches and tacticians to crack that problem. His “pod” strategy worked, it even became a book entitled Cracking the Code: The Winning Ryder Cup Strategy: Make It Work for You.

The USA fell back to their nostalgic ways when they elected Tom Watson as captain. The old school values and dictatorial non-communication style with this new breed of young players did not work. Those days are well and truly over. You have to be current. It was sad to see the players turn on Tom as he did the best he could the only way he knew how. Picking him as captain was the error.

Enter McGinley, who took the role and approach of the captaincy to a whole new level. McGinley is probably the smartest golf professional I have met over the last 40 years associated with the Tour. He had the time, smarts, resources and desire to change the captaincy game. He picked the best minds in sport for the cause. His captaincy is now studied at Harvard and his approach has made him a much sought after motivational and business strategy speaker. Everything was planned and executed according to his plan. He made all the calls.

The story of the big picture of the monster waves bashing up against the Cliffs of Moher hanging in the locker room all week sticks in my mind. Nobody knew its purpose until Saturday night. He told his team – who had a big lead – that the Americans would come at them on Sunday morning like these huge waves, wave after wave, and that they must withstand the surge until around mid-day and if they did, we would win. He was spot on, once again.

The challenge now for both sides going forward is to find captains like Langer, Azinger and McGinley. Very few of those eligible have the qualities or qualification needed to do this very specialized job. The Americans are now galvanised with this new group of young, fearless and “cool” players who have bonded. Europe will need to up its game, even on home soil, to beat them in Paris in September.

A final thank you to Tony and Seve for what you have done for the Ryder Cup that we all love and enjoy so much.