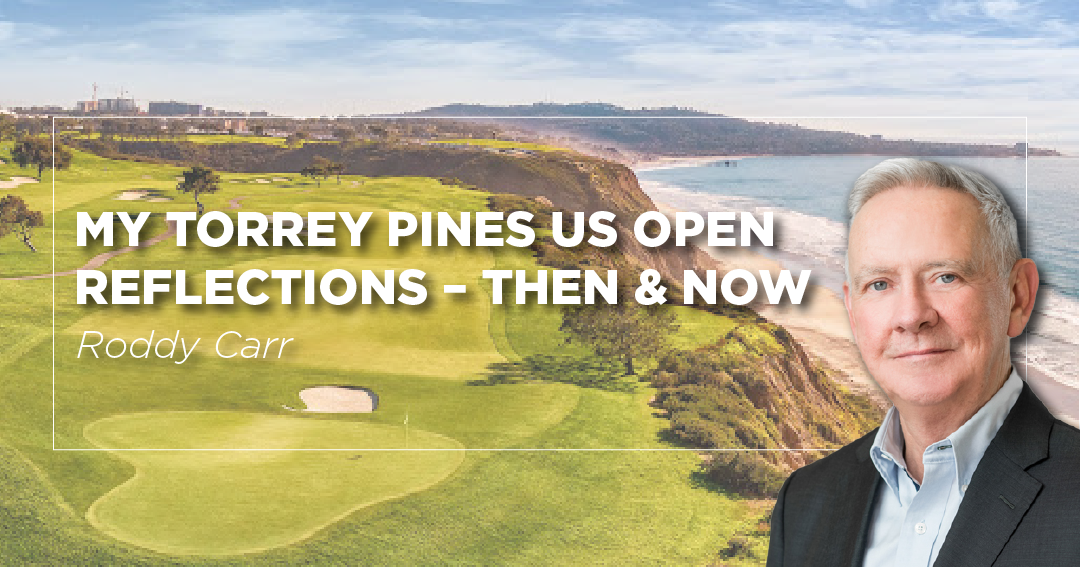 Comments Off on Roddy Carr’s Torrey Pines US Open Reflections

My Torrey Pines US Open Reflections – Then & Now

You cannot reminisce about Torrey Pines without thinking of Tiger Woods back in 2008, where he beat the field on effectively one leg. He ignored the urging from his caddy and doctors to quit, snapping with almost obsessive determination, “I am going to win this!”

The US Open for an American is like the British Open for the UK, Irish and Continentals.  It’s their national title, the Major they want to win most.

I remember my father telling me that he won his second British Amateur Championship in 1958, playing all week with a sprained left ankle. JB commented at the time, long before Tiger was an apple in his parent’s eyes, “Beware of the wounded Tiger”. He believed with an injury that your focus is singular, you are much more controlled with your movements and therefore more compact and balanced. Not bad traits when playing the ball-breaking test that the USGA delights in presenting for its Open Championship.

Reflecting on Tiger again this week, his life has been like a rollercoaster ride for him, plenty of ups and downs. My mother used to tell me as I struggled on the Tour, “You won’t know the heights of the highest mountains until you know the depths of the deepest valleys”.  Tiger’s life has been all about climbing mountains after falls. It was how he was brought up by his ‘Special Forces’ father, Earl. I remember when working for Mark McCormack at IMG in Cleveland, Hughes Norton was recruiting a teenage Tiger.  When Hughes would visit, Earl would have everything prepared and Tiger would be brought in demonstrate his golfing prowess. As it happens, my PA at the time, Kathy Repeta became Tiger’s PA when he left IMG and she’s been working with him for decades.

There is little doubt in my mind that Tiger’s recent crash has presented him with yet another enormous mountain to climb. It’s in his DNA, to get back up and climb this mountain. He did it two years ago for arguably the greatest comeback in sport, to win his 5th Green Jacket at Augusta in 2019. I believe it was golf’s kiss goodbye for him. I cannot see him winning another Major, though I do see him competing again on Tour. It reminds me of when I was managing Seve towards the end of his career and he lost his game completely… his life lost meaning for him. With Tiger, he will never lose his game, so he will be back I believe.

All this Tiger talk reminds me of the character and discipline it takes to win the US Open, the Major they consider the toughest test of golf in the world. It’s why the greatest players of all time all have their name on the Trophy, multiple times. Bobby Jones, Ben Hogan, Jack Nicklaus each with four and Tiger with three.

Has the current crop of young players got what it takes to grind it out for four days, trying to get into the red and not ‘lose the head’? Torrey Pines is set up to break them, slowly but surely, over the four days. It’s a ‘last man standing’ kind of thing and is why men of sterling character have won this Championship many times.

One thing for sure, come Sunday night whoever is the Champion will have showed bravery, patience, perseverance and courage… and will be exhausted. The question is, who is the wounded Tiger at the US Open this year???