JP Raises The Bar With The Golf Course at Adare Manor 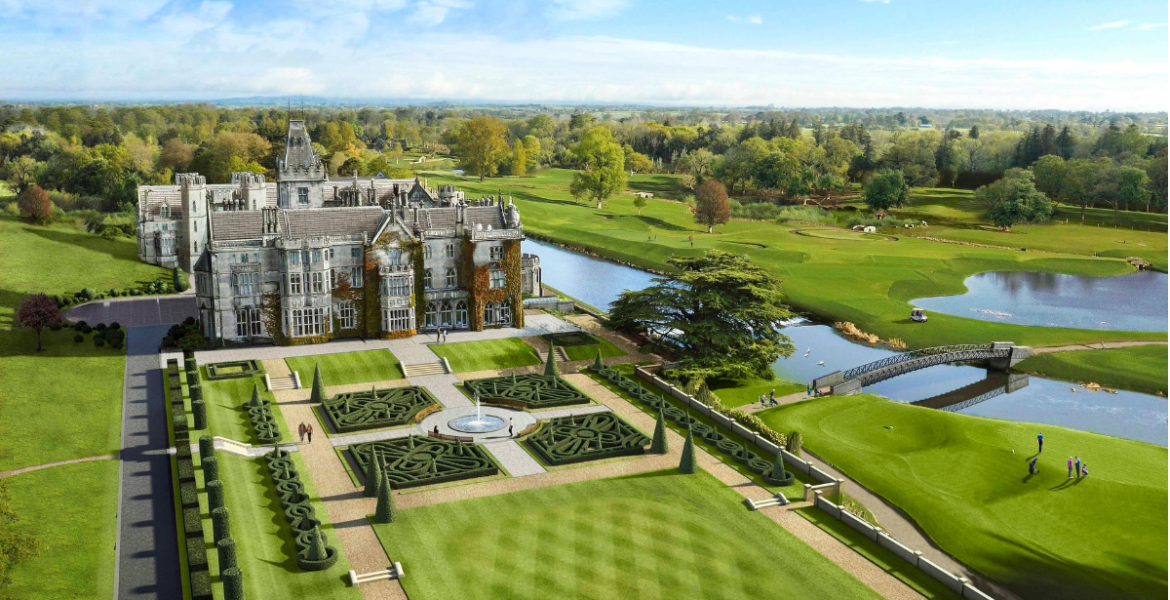 Just over thirty years ago I returned to Ireland from my on the job ‘What They Don’t teach You at Harvard Business School’ education with Mark McCormack in Cleveland and Hong Kong. To my shock I realized that Jack Nicklaus, the world’s greatest player had never set foot in Ireland. With the support of the late ‘Toyota’ Tim Mahony we rectified this and brought Jack to Dublin to play against Seve at Royal Dublin in front of 10,000 fans for the Toyota Challenge of Champions. This led to Tim asking Jack to design Mount Juliet for him, which he did.

Tiger Woods hits his tee shot at the 3rd hole at Mount Juliet, entertaining a packed crowd at the WGC American Express Golfing Championship in September 2002.

When Mount Juliet opened in 1990 with an exhibition between Jack and Christy Snr. with my father refereeing, I will never forget the reaction from the golfing spectators from around Ireland. They had never seen or experienced the level of quality manicured grasses or such high maintenance standards. “These tees are better than our greens!!” I heard several times on the way around. Mount Juliet had set a new standard and was the catalyst for change in cultural practices for golf course maintenance for all inland courses in Ireland.

On Friday last I had the pleasure of being invited to the Charity match to launch the opening of The Golf Course at Adare Manor, the ‘pet’ project of the unassuming Limerick philanthropist, JP McManus.  The big four of Irish golf Rory McIlroy, Padraig Harrington, Shane Lowry and Paul McGinley played with €500,000 donated to Charity and the 2020 JP McManus Charity Pro Am was announced.

The 18th Hole at The Golf Course at Adare Manor.

My brother Marty and I toured the Manor House, the new clubhouse, spa and state of the art maintenance facility. The Manor House, which is more like a castle, has been restored and returned to its former majestic glory. Every window pane, stone and slate has been painstakingly restored and the extension is hard to differentiate from the original house. The smells from the wood burning fires and gentry smoking for hundreds of years has seeped its way into the old wooden floorboards and mahogany antique furniture and radiates throughout the Manor. It is a constant reminder of being in such an old and historic place.

The dining rooms have a solemn almost church-like feel to them that heightens expectations of the gourmet cuisine you will enjoy. Most of all and apart from the grandeur there is a sincere, warm and genuine Limerick welcome from the proud locals working there.

Even back in the days of old, the gentry could never have imagined what now lies on the estate farm lands on the other side of the rapid flowing River Maigue.

The original Adare Manor Golf Course was designed by Robert Trent Jones Snr. in 1995. He was considered one of the best ‘routing’ specialists by his peers. The river and it’s ‘burn’ tributaries, the huge old oak and cedar trees in addition to the 700 new mature trees planted (maple, beech, birch & oak) create corridors for the existing layout.

A view of the 7th hole at The Golf Course at Adare Manor.

After that it all changes. Like Augusta there is no rough. You will only lose your ball to water. The ryegrass tees and fairways are tightly mown and immaculately groomed. The course from the tee is open, inviting and generous, leading you into a false sense of security. It is from there the real fun begins.

Nowhere outside of the USA have I seen anything like the challenge presented by the bent grass greens and greens surrounds from the strategy created by Tom Fazio and his able first lieutenant Tom Marzolf. The brand new greens ran at 11.5 on the stimpmeter on Friday after the worst winter in decades. They will go to 13 in the summer and will always be firm due to the sub-terrarium system installed. These are Augusta speeds, as is the degree of difficulty navigating the expansive undulations.

The fiercely undulating and quick greens at Adare Manor will test the very best putters in the game.

There is nothing like it or even close to it in parkland golf in Europe. The aprons are now better than any parkland greens in this country and the greens are the fastest and purest in Europe. The precision required is excruciatingly difficult. For the first time, golfers will now be able to experience what Rory and the other great players in the game encounter at the Majors. They will also understand strategy and risk reward consequences which is the hallmark of Augusta. The bar has been reset thirty years on. One thing for sure is it will be a unique experience for those lucky enough to play it.

A steep run of area greets players on the 18th hole if they go left on approach, leaving them with a pitch shot towards water green-side right.

The Golf Course at Adare Manor is now one of the favorites to host the 2026 Ryder Cup. It was of course no accident that all the technical specifications for hosting a Ryder Cup were incorporated into the renovation and rebuilding of the golf course. The four players loved it and the course is ideal for the high drama that is an integral part of match play for a Ryder Cup.  It’s not a done deal however, but if I was a betting man and I am, I wouldn’t back against JP and his friends.

As we drove out through the estate gates on that sun-blessed opening day Marty turned to me an commented: “it’s off the charts isn’t it?….makes you proud to be Irish”.

The perfect brother’s day out. Marty and Roddy all smiles as the sun beams down for the big opening day at Adare on Friday April 20th.

To enquire about creating a South West Ireland experience including The Golf Course at Adare Manor, please contact our travel team today using the contact form below, or call +353 1 822 6662 or US Toll Free 1 855 617 5701.