Augusta time again and how sweet it is 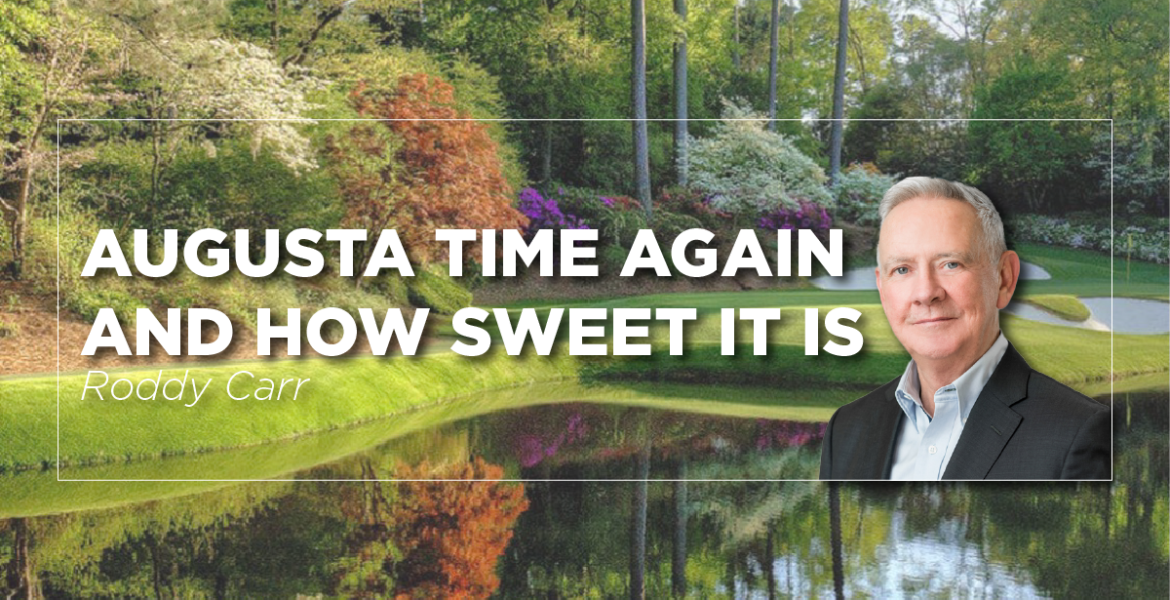 Comments Off on Augusta time again and how sweet it is

AUGUSTA TIME AGAIN AND HOW SWEET IT IS

You have to hand it to Augusta with their old-fashioned Bobby Jones values of integrity, respect and responsibility. They held their Masters in November 2020 their way, a safe way, in the midst of a global COVID 19 pandemic, just as their founder would have wanted them to. It gave people hope during a time when other Majors were cancelled. It brought joy to the 50 million global golfing community, starved for a taste of normalcy and in need of hope and reassurance that life would return to normal sometime soon.

Such is the picturesque framing of each hole at Augusta, each is remembered as an individual and magnificent oil painting. Their beauty, especially on the back nine, disguise the cunning, devious nature of their character. I don’t think any of the great players over the years have escaped unscathed. Many have been mortally wounded, with some yet to recover. Such was the spectacle of watching last year’s Masters with no Patrons present, the course’s devilment went virtually unnoticed. Tiger will no doubt have missed his pied piper fans lifting him to perform extraordinary things, as they had the previous year.

The weather has been good in Georgia this Spring, and golf’s Mona Lisa will present at her most beautiful. Magnolias will be blooming, with dark green fairways and firm greens cut with military precision, dotted with snow white bunkers dancing to the beat of running streams. It’s hard to describe to anyone who has not been to Augusta just how gorgeous a place it is, where order rules. 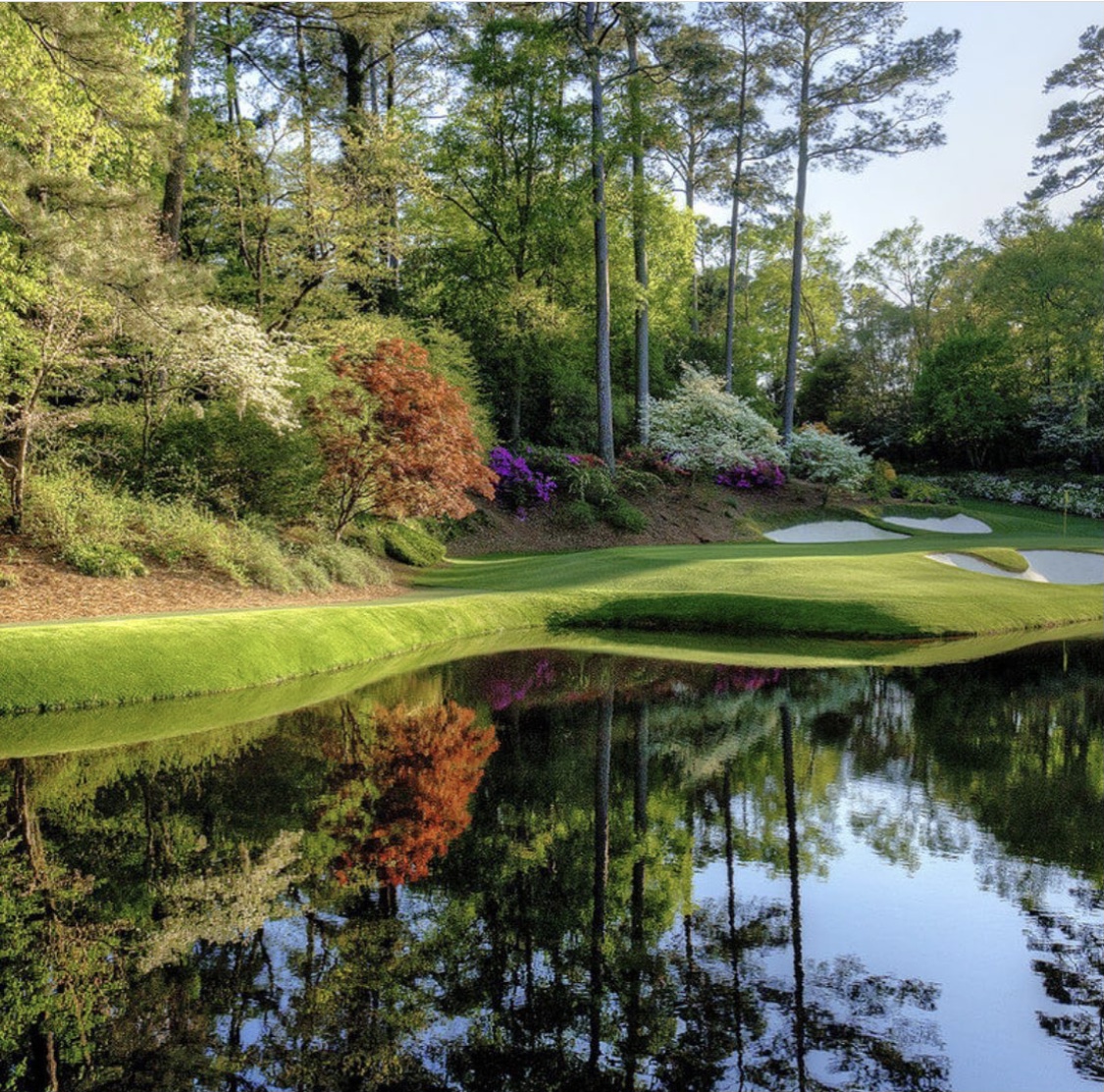 With a dry lead up to Easter, the green blazers are afforded the luxury of defending her more aggressively. Expect hard, fast greens and exacting pin positions that only fools rush in and dare to attack. It was fascinating to see the first day carnage on the famous 137-yard 17th hole at the recent TPC, with the usual American dart board greens transformed to a bone hard, brown links style. It must have felt like playing like St. Andrews after a long dry summer.

Back in November, all the talk was about how Augusta would defend against DeChambeau. They did nothing. I wrote a piece back then entitled, ‘An Assault on Augusta’, commenting on the irreverent attitude DeChambeau had adopted in his approach to Augusta. I trusted that the golfing gods, as they do, would put manners on this young adventurous soul and at the same time contribute to his development as golf’s outlier.

It has been fascinating to watch how quickly Bryson has learned and matured his approach and character. The sincerity of his demeanour at Bay Hill was striking, he’s now more comfortable in his own outlier shoes. A genuine and likeable guy who fully understands his superstar responsibilities in a sport blessed with past icons of integrity such as Jones, Palmer and Nicklaus.

Bryson will not lose his ball plugged in the saturated ground left of a green he was trying to drive. Nobody will see balls imbedding themselves on the 15th green this year, though they may well see players dropping that same shot from the lake behind the green!

He has changed the game in a similar way Tiger did with his length more than 20 years ago. As DeChambeau wrestles with his speed addiction, he has probably realised he may have reached close to his body’s limit. He is though, no longer as arrogant and Bay Hill showed us he’s having fun. Bryson proved he has the ‘cohones’ and courage to ‘go for broke’ ala Arnie, as he tried to drive the Par 5 6th hole in the last round while under pressure. He pulled it off.

Augusta will be a completely different course than in November 2020. It will suit bigger hitters with the most creative and imaginative short games. It will suit DeChambeau, DJ, pull the trigger Koepka, who arrives in Augusta less than a month after knee surgery. Thomas, the hungry Rahm and our own Rory, who recently changed his coach, will also fancy their chances.

Strangely, Rory’s lack of form coming into the Masters may play into his favour and keep him under the radar as he chases his lifelong ambition of joining the illusive and exclusive Grand Slam club. He loves this course and his game is built for it. He needs to get his rhythm and mojo back to pull it off.

This whole cycle of chasing length has taken its toll, and unfortunately Rory got sucked in. I saw it happen in Tiger’s early days, when he introduced what was a new and sophisticated gym strength and conditioning regime. The casualties for those chasing Tiger back then were significant. Norman and Seve were two of the bigger names, with players like Luke Donald and Matteo Manassero suffering similar fates and whose careers declined far too early.

Spieth has his own score to settle with Augusta. We’ve seen this year that he’s an exceptionally determined young man and he has ‘Georgia on his mind’ after just securing his first win in four years in Texas.

Winning the Masters is immortality in golf. It’s the only event that invites you back every year until you cannot play well enough and become an embarrassment. Nobody does that. It’s a code of honour.

The anticipation is palatable. It’s Easter time, Augusta time in Georgia. Everyone is ready to treat themselves to four good days and for once be happy to stay in, cocoon and watch the drama unfold on golf’s most beautiful canvas.