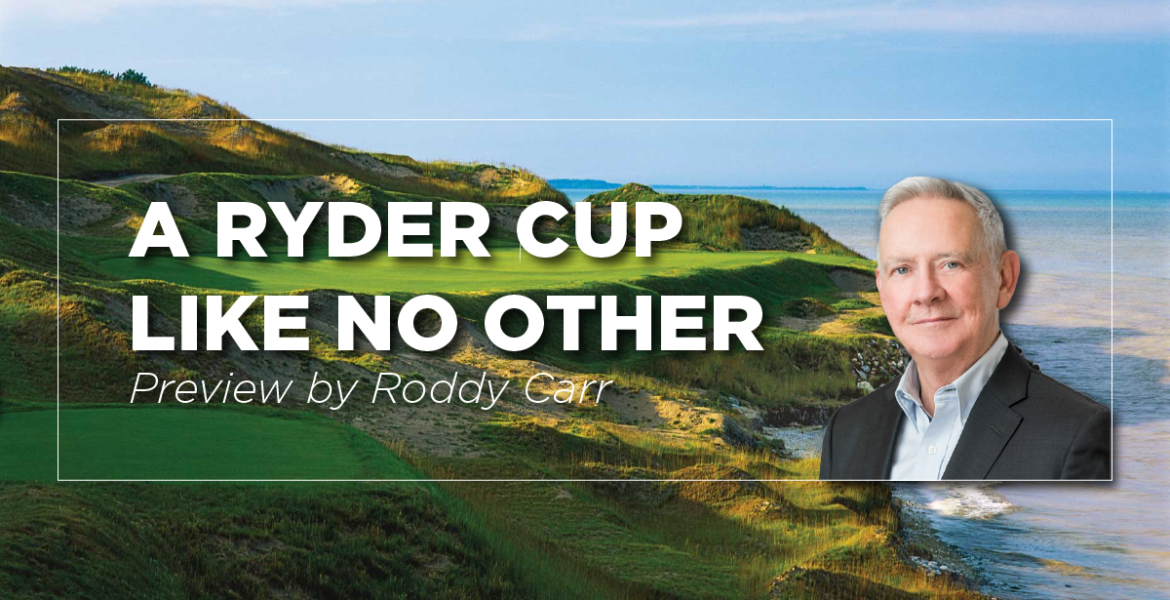 Comments Off on A RYDER CUP LIKE NO OTHER

With little or no European support in an America that has changed in character and personality beyond belief in recent years, this will be a Ryder Cup like no other.

The decorum of fans on the golf course is a major concern within the PGA Tour. The recent declaration by commissioner Jay Monaghan that “Brooksie” heckling by fans towards DeChambeau will result in their expulsion from the course was a precursor to this week. The atmosphere could become hostile.

Discussions in the European team room this week will have included how players react, or more importantly, don’t react to the crowd. It was a smart move by Padraig to charm the locals with the ‘Cheesehead’ publicity stunt. Being an Irish captain in the conservative state of Wisconsin will play into his favour, as will having Rory and Shane on the team.

The captain’s role is critical, with preparation and attention to detail vital to success. Harrington is well suited to the role. When he first turned Pro in 1995, I was one of the lecturers at the European Tour’s induction course at San Roque in Spain. Alongside colleagues John Jacobs, Tommy Horton and Brian Huggett, we sought to educate Padraig and his fellow rookies as to what lay ahead ‘on tour’. We passed on my father’s often said words, “If you have a weakness, the Tour will find it”.

Each morning Padraig was first in the conference room, he’d sit on the front row with two yellow pads and sharpened pencils, waiting eagerly to record every nugget. I recall vividly his hounding of the lecturers that week.  They approached me on the last day, “Who is this Irish kid? We haven’t come across anyone like him before, he’s had us demented with questions!” Each evening Padraig would retire to his room to type-up his notes, filing them for reference as he started his relentless pursuit towards the Champion golfer he is today.

Padraig will need all that he learned this weekend, with the cards stacked firmly against his team. The man-made links-style Whistling Straits course and its cool, windy landscape should suit his boys. Stricker knows this and has used his home captain status to nullify any advantage by dictating the course set up. It’s a tactical advantage that dates back to Dia Rees’s captaincy in Lindrick, 1957 when his European team beat the Americans for the first time since 1933 on a course so hard and fast, the US couldn’t manage it.  I recall travelling to Valderrama as Seve’s manager in July 1997, as Seve plotted the narrowing of fairways to 15 metres at 280 yards with US Open style rough, in an attempt to eliminate the ‘El Tigre’ (as he called him) factor and his prodigious length.

Stricker has taken advantage of his US side’s power game advantage, setting the course with little to no rough and generous pin positions that will favour ‘bombers’ wedging it out of benign rough. His issue though, is not player quality – the US team outweighs the Europeans on all statistical rankings – it is the lack of bond and solidarity in his team, compared to the well-oiled, passionate and spirited Europeans.

Koepka’s comments this week, that US players should be allowed to keep to their own independent schedules epitomises the problem. Phil Mickelson infamously broke ranks following a comprehensive 2014 defeat at Gleneagles by throwing captain Tom Watson under the bus for his old-fashioned approach to modern day player. Watson expected his players to do their job without interference. It was a brutal assault by Mickelson on Watson, one he later regretted when it became clear to him that the issues ran much deeper.

Individuality runs through the DNA of the US golf system, with an emphasis on individual stroke play from the junior grades, through college and on tour. There’s very little ‘mano de mano’ match play combat. Unlike in Europe, where match play is prevalent at club, regional and international team level. The Irish development system in particular is arguably the best in the world for breeding champions – it’s not simply the ‘luck of the Irish’ that has led to 10 major winners in recent years.

Seve was the ultimate ‘mano de mano’ matador. His win-or-die mantra is at the heart and soul of each European team, and he will always be part of the pictorial personality of the team room. With individuals like DeChambeau and Koepka, I don’t envy Stricker’s job in developing a true bond and a cohesive, unselfish team unit with a single mission.

The final and probably most important job of the captain can ultimately come down to instincts… the team pairing selections. It’s the captain’s choice and his choice alone and the obvious picks are not always the best picks. Seve broke the mould when pairing the fiery Spanish with Scandinavians in Valderrama. McGinley did a superb job in 2014, with months of meticulous preparation helping him draw the right conclusions and deliver the best partnerships.

The big question is how these various elements play out through to Sunday evening. On paper the Americans are firm favourites and statistically should win, a view endorsed by the betting companies. However, Harrington has often overachieved and his upbringing as the son of a policeman means he will not be intimidated. He has relished the role of underdog for most of his career.

Padraig is a much-loved player who has earned the respect and admiration of his teammates and the golfing public. His European warriors will battle to the very end for him and if they are beaten, the Americans will have truly deserved their victory.